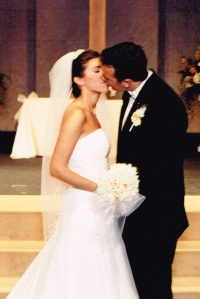 I was that girl.

The one that had more friends of the opposite sex than of my own.

Even as a twenty something, some of my closest friends were guys, and honestly I didn’t see this as a problem…..until one night at a single’s retreat. The teacher spoke of unhealthy relationships between men and women, and he wasn’t talking physical. It went something like this:

If you are in a “friendship” relationship with someone of the opposite sex where you share your hopes, dreams, details of your day, etc. a “best friend” per se….and this friendship isn’t leading towards marriage, then it is not a good idea.  You see male/female “friendships” that are this close only last for one reason. One person is more invested in the other. So either you are leading someone else along, or you are being led on. Neither of which is a good situation.

Ouch. Immediately I thought of a few names. Well, we are in different states, I thought. It doesn’t matter. Surely this pastor isn’t talking about me.

When I got home I made a few phone calls. One was easy. He agreed.

The second phone call wasn’t so easy. He didn’t agree. Thought it was silly. So I caved and left things as they were. He was still on my speed dial, and I was on his. And I let things drag on.

A few months later an old roommate from college and I decided to approach the dreaded Valentines Day with a spiritual focus.  With me in Florida and her in New York, we both had that urge to fast and pray for two weeks!   I decided to pray about marriage, ministry, and missions. I was very single, but these were three desires of my heart on which I hoped to hear God speak.

As Valentines Day and the end of our fast drew near, I kind of hoped for some grand display from God, some reward. But it didn’t come. Just like every other Valentines Day, this one passed by without a single declaration from an admirer.

What I didn’t realize was that this time with God, in prayer and intense Bible study, gave me the strength to be obedient. Strength that I didn’t have 5 months before.

The next month that aforementioned guy friend came down for a visit. And this time I swallowed my pride and shared my heart. This relationship wasn’t healthy. It was confusing. And I knew there needed to be a big change. This time, seeing my face, he understood. And it was over.

Losing a friend is never easy. And this situation was no different. I was sad, but trusted that God knew best.

And boy did he ever. There is so much more to the story, but the cliff notes version is this:

God put a different man in my life who was more than I could have asked for, thought of, or imagined. We fell in love, got married and had lots of babies.

But here’s the clincher.  You see, ten years or so into our marriage I was looking over past journals and found something that completely blew my mind. And even typing this gives me chills. As I thumbed through the pages I couldn’t help but notice the dates.

But that’s not even the best part. The day that I finally obeyed the Lord and gave up– letting go of what I thought I needed was:

Here’s the thing. My God knows that I love numbers (especially the number 22) 🙂 And He was trying to write a story in my life that would glorify His name. But I was holding on to less than His best for me. It wasn’t until I let go and stepped out in faith, after seeking Him more intensely than I ever had, that I received that miracle.

This is not a formula for a miracle. But it is a reminder that there is no greater plan, no greater decision, and sometimes no scarier step than saying yes to God.

Because what He has for you, it is so good.

Today, as I celebrate my anniversary with the man of my dreams, I am so thankful that I said yes to God and I pray that you would too!!

7 thoughts on “The Tough Decision That Changed My Life”