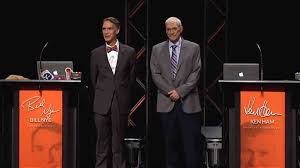 ****Edited to add these videos which were the inspiration for the post, along with his previous interviews

70 thoughts on “Why Bill Nye lost the debate last night.”